Kingdom of the Dragon

Did you pray today? 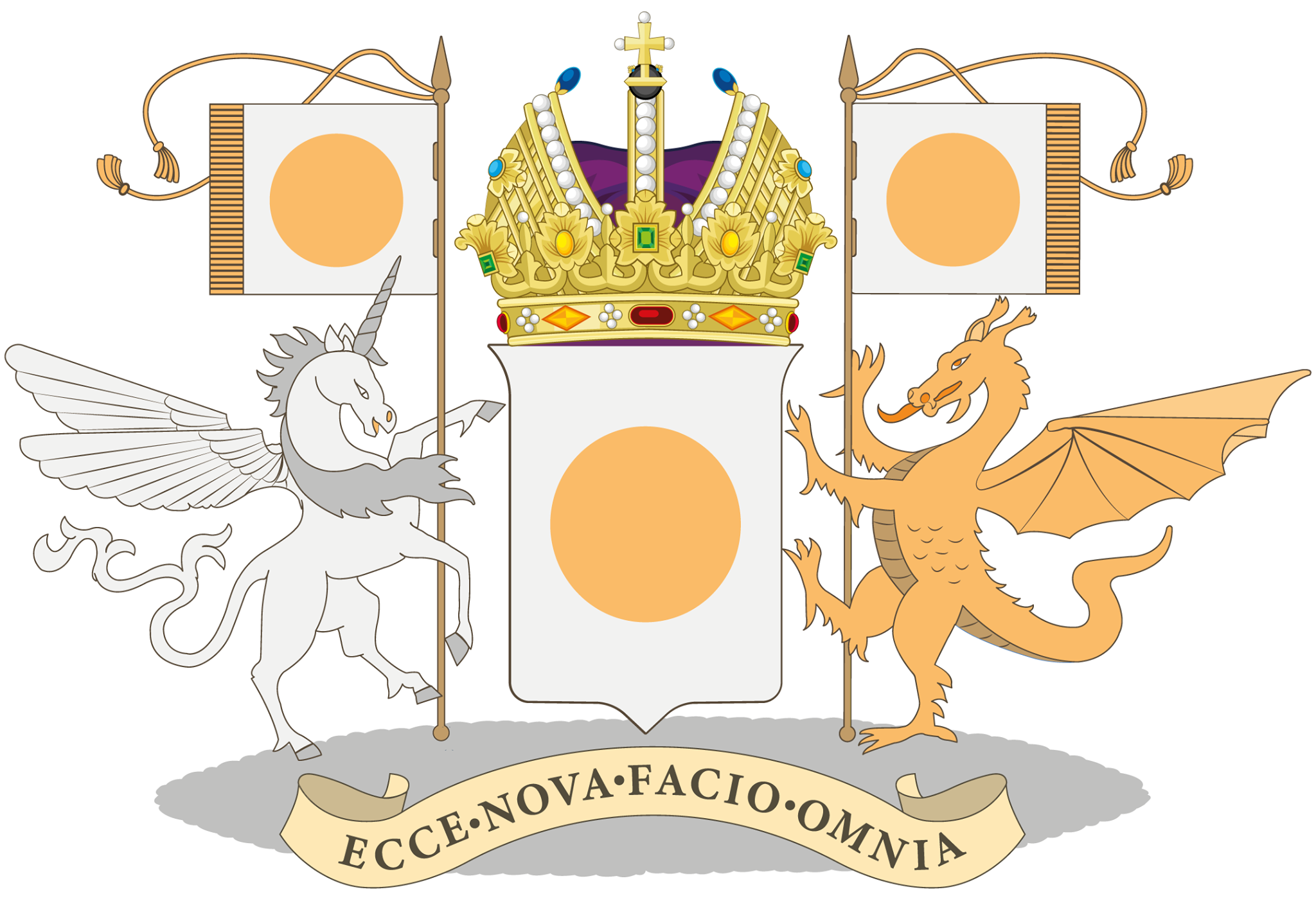 The silver shield with a golden ball on the stand. Shield supporters golden dragon rampant dexter and silver unicorn rampant sinister. Both have a white flag with a yellow ball. Golden Imperial Crown with purple velvet. Motto: Ecce Nova Facio Omnia. Heraldic Note: Gold and silver in heraldry is a sacred combination, which is used by HIM Dragon and Jerusalem.

THE IMPERIAL AND ROYAL FAMILY

It is Good=3 if the HiRes version that used to be available, is returned. However, as long as it is not, the situation is symbolic of the State of the World.
The Phoenix
Top

To manage the exponential growth in our numbers, from the current 200 registered accounts up until the victory week, it is important to know who calls the shots. This is the first version of the Table of Ranks, drawing correspondences to Levels, Level Titles (ranks), and advances in the 7 Planetary Ministries.


§1 The Table is based on the Kingli Levels System (read all from that post onwards). 9,000,000,000*VAL total will be awarded in 160 weeks (120 to go), which, as power law applies, gets distributed to 100 million people, some having more and others less. The concentrations of VALta are the basis of Levels. The numerical value of a Level is a function of the number of VAL. The Level Titles (Ranks) are based on Levels, so that when the value of VAL goes up, the Rank cutoff levels go down with an Imperial edict.

§2 In addition to raw VAL, it is possible to distinguish oneself in other tracks and fields in the 7 Planetary Ministries. Most of these to be announced.

§3 The Highest Grade Counts principle is followed, so that a Character is treated according to the highest advance in any of the tracks.

§4 "We do not grant any rank to anyone until he performs a useful service to the Ministries"; however, at the moment joining us in any way possible, is a most useful service and will be rewarded with a rank.

§5 In Events, the organising branch general officers use 1-5 stars insignia of their branch and get precedence over others in the same rank.

Other Kingli participants and VIP-guests are honored according to their highest grade in any branch and have 1-5 gold stars in their badges.

Visiting guests and non-Kingli participants have 1-5 silver stars in their badges based on their standing.

§6 When SpecOps and other military officers are present, the SpecOps Generals always take precedence over Generals/Admirals of the same rank in other branches.

§7 Consorts inherit the ranks both in records and in events. (To get your consort character to advance in Levels in lockstep with you, however, you must split the VAL and both must level-up separately.)

* Inspired by Peter the Great, Emperor of Russia
** The cutoff level to gain a Level Title (level-based rank) goes down over time, so even staying at same level makes you gain a Rank every ~6 months
The Phoenix
Top The following promotions and badges were processed during the investiture yesterday. Please also note the corresponding VAL grants related to the badges. If you find any discrepancies on your own or someone else's balances, please contact me by PM.

With HIM Dragon's discretion I Duke Nukem would like to claim the following badges:
Top

"From Old stems the New,
and the New is born."
Top
Post Reply
32 posts